“May your trails be crooked, winding, lonesome, dangerous, leading to the most amazing views. May your mountains rise into and above the clouds.” – Edward Abbey

It’s Sunday, February 17, 2019 and I’m standing on the edge of the Carretera Austral, the north-south road that winds its way through Patagonia from Puerto Montt, about 400 miles to the north, to Villa O’ Higgins, 140 miles to the south. I’m at the entrance to Patagonia National Park and I can see the Austral curve and dip and rise through mountains and valleys far into the distance. The van that just dropped me here is a tiny dot heading northward and when it disappears around the last bend there is complete silence surrounding me. It’s a sunny morning with clouds floating slowly by like giant white hot air balloons. It’s a special day for me, my sister Judy’s birthday. She passed away in 1989 at the age of 36. Normally my sisters and I would be texting each other all day but I’m far from any cell reception and will be for a few days, so I’m on my own with my thoughts, prayers and grief today. There is a blessing in this timing though. The silence and beauty that surrounds me lends me an open heart and a chance to feel what I feel in a rare and soulful way.

The land around me is mountainous and looks arid, not many trees at all. There are snow capped peaks around the entire horizon. I’ve read that this part of the park is in the rain shadow of the western range of the Andes. The terrain is grassy and open and starkly stunning with the constant backdrop of jagged, wild high peaks. It was ranch land and heavily over grazed before being purchased by Conservation Patagonia (with major involvement from Kris and Doug Tompkins and Patagonia Inc. I need to make a correction here: Doug and Susie Tompkins, his wife at the time, founded Espirit, not North Face) and they removed all the fences and began the task of restoring the land to its native state. It was just recently turned over to The Chilean government and made a national park and I’m feeling lucky to be here in its early years. I soon learn that the thousands of acres that surround me have been set aside and are being restored as an Eden, a sort of Ark, a place where this part of the natural world might survive intact regardless of what we do to the rest of the planet.

It’s about a nine miles to the visitors center and campground and I’ve decided to walk it. The day is gorgeous and the views unearthly, so I throw on my pack (more like wrestle it on, I have several days food with me) and start my trek up the gravel road into the park. Soon I’m passing herds of Guanacos (closely related to the llama). They look at me with curiosity as I pass. If only they knew that I’m the curious one! For a while it is so utterly silent that I feel as if my head is wrapped in a heavy layer of gauze, then a few cars roll by and I wave as they pass. Besides that being my usual thing I want them to know that I’m not trying to hitch a ride. Two backpackers appear on the road ahead of me, walking out of the park. We smile and say hi as we pass. The silence continues. I am the man with no name, Hombre sin Nombre. Andean Condors fly overhead. A breeze whispers secrets known only to this vast, wild land in my ear, secrets that you have to be here to understand. I’m overcome with gratitude, because this is the moment that I’ve traveled so far to experience, and on my sisters birthday! You know what I mean, it’s that ‘moment of clarity’ that most of us have only a few times in a lifetime. Fortunately this moment is allowed to hang in time as I walk the long quiet road. After about four miles a truck passes by and pulls over and the driver offers me a ride. I’ve been walking slow, mesmerized by landscape and decide that I better get a move on and accept the offer. I’m at the visitor center in a few minutes getting directions to the campground and then walk the last mile and a half to a meadow that has several tents spread around it and I check the wind direction and put up my tent and lay on the grass and stare up at the blue sky with those big billowy clouds waltzing by and let gratitude wash over me like a river.

I spend three days wandering just a small part of this enormous park. I’ve seen too many guanacos to count, Andean condors, a very friendly Pygmy owl, a freaked out armadillo, dragonflies that happen to live the furthest south of any of their kind, butterflies, bees, hawks and foxes. One fox was hunting a rabbit when I came upon it. It was amongst a herd of guanacos and they were pestering it and I could see it’s look of irritation at them as it tried to catch its breakfast. I barely got a photo, startling the fox, guanacos and rabbit with my laughter. I don’t think the fox caught the rabbit. I watched a full moon rise over the Andes, together with other campers, transfixed by its golden radiance. It seemed as if it was only ten feet from me and I could reach out and touch it…

And then it is time to say goodbye. It’s mid afternoon and I’m looking over my shoulder with Sadtitude (sadness and gratitude, if you are a late-comer) as I walk past the visitors center to the gravel road that leads out of the park. I set my backpack down next to me and stick out my thumb and the first car to drive by pulls over. It’s the couple from Britain that I met on the Cerro Castillo trail, being guided by Diego. We talk all the way back to Cochrane and hug goodbyes and I walk into town, looking for a soft bed and hopefully a warm shower. I break out my harmonica and start to play a tune as I walk and I notice that it makes the dogs howl and the roosters crow. It’s been a good day, indeed. 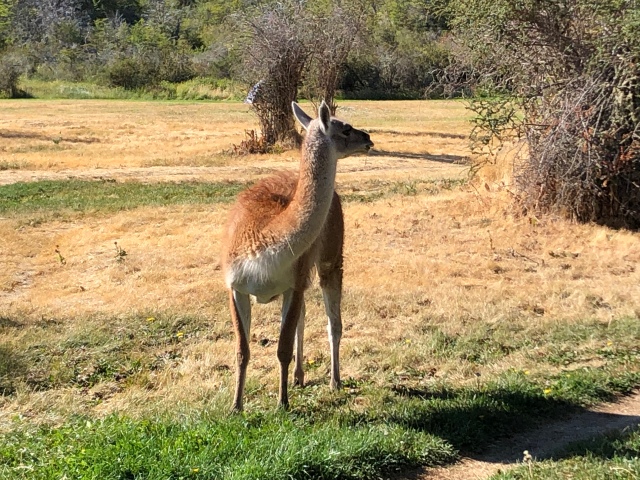 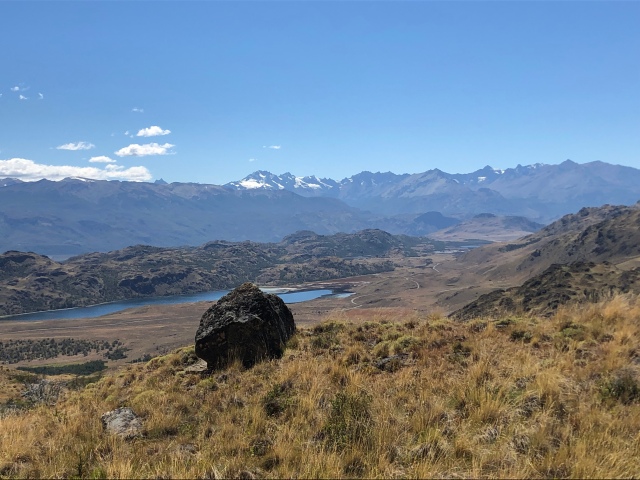 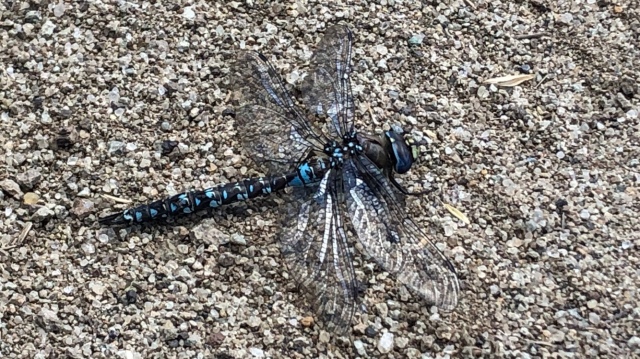