“You only live twice, or so it seems, one life for yourself, and one for your dreams.” -Leslie Bricusse

After two nights resting in Villa Cerro Castillo I’m ready to head south on the Carretera Austral. You never know how far you’ll get, it depends on what bus pulls up that day and if there’s room in it and where you are in the line of locals and backpackers. There are about ten of us waiting on this sunny morning and it doesn’t look good. Also in the distance on the side of the road are small groups that are hitchhiking and will rush to the bus when it pulls up. Sounds bad but I swear, everyone seems to get where they need to go, at some point. The key is not to stress about it. Most travelers that I’ve spoken with, and also myself, just roll with it. Your home is on your back for goodness sakes. You can have tea for four made in ten minutes anywhere you are. So the first bus that rolls by is full and I walk up the road to a bus that’s been converted to a cafe with Elise, who I met on the Cerro Castillo trail a few days before, and have a coffee. She is about 30, from Tahoe and is traveling solo. She has just come off the trail after being out there for five days. It turns out she spent summers working with children at Camp Harmon in Boulder Creek, a mile from where I spent my summers from day one. It really is such a small world. Most of the women that I’ve seen or met who are traveling solo are my daughters age or younger, many in their twenties, on summer break from university. Those from other countries, mainly Europe and the States, are traveling during their winter and are on the road for varying reasons. Having grown up with four sisters and being blessed with two incredibly strong and free daughters in a country where they wouldn’t think of hitchhiking five feet gives me a deep appreciation for these women who are on the road like this. In my heart I adopt them all as daughters. Most who know me are aware that I like to ask a lot of questions and I will make a point of exploring this in the future: where are the women (and men) between ages 35 – 70 on this road? There are many obvious but not painless answers. I guess I ask because the answer to the question is a seed that may sprout within some of us and help make a better world out there for us all, mothers, daughters, fathers and sons.

A bus pulls up next to the cafe instead of at the stop we had just left and Elise and I quickly chuck our backpacks into the luggage compartment and hop on and are on our way to Puerto Tranquilo. This is about 110 miles down the Austral, only half way to Cochrane (where I’m headed) but it’s forward progress, right? The road is gravel to its end far to the south in Villa O’ Higgins and it’s a bumpy and dusty but scenic ride along river valleys and Elise and I share travel stories and I’m telling her about the bicycling French family and voila, the bus passes them; parents and two daughters on two tandem bikes and the oldest daughter (eight years young) on her own bike, pedaling hard in the dust as we pass. I’m thinking they must be from another planet! Amazing. And they just finished the four day Cerro Castillo hike. Very surreal. Bless them.

Tranquilo is on the northern end of Lake General Carrera, the largest lake in Chile. Its a tiny town where you can catch a boat to marble caves on the lake and also access San Rafael glacier. The lake is famous for the immense and dangerous Antarctic winds that roar in with no warning and it is blustering and threatening when I step off the bus. This stalls all boating activities and thus I find the few small restaurants and such packed with people, with an atmosphere that Ullrich later describes as ‘frontier gold rush town’. Elise speaks fluent spanish and helps interpret traveling instructions for me before we say goodbyes. She is traveling south to meet family near mount Fitz Roy. I find a place to stay and locate a seat in a crowded restaurant and eat an entire pizza (I’m still recovering from the hike and eating like a wolf) and call it a day.

I’m waiting for the bus in Tranquilo. It’s a sunny but windy Saturday morning. Remember that the road in and out of town is washboard gravel for a hundred miles in each direction and you can become stranded here for days waiting for a seat on a bus or a ride out. Doesn’t sound like much fun if you don’t embrace this as part of the journey, it’s not like you are in a busy downtown bus station, you are in Patagonia with no real destination anyway. A small bus pulls up and I manage to get a seat after tossing my backpack to the driver who is standing on top of the bus storing packs and suitcases. He’s wearing the traditional black beret and runs his bus with a military but funny flair. We’re ready to hit the road and he asks for tickets and I don’t have one (ha ha funny me, didn’t know I could get one) and he shakes his head and boots me off and has to climb to the top of the bus and dig out my pack and he’s both grumbling and laughing and one lucky person gets a seat! I’m sitting and waiting for the next bus (I confirm no ticket required) and up walks Andy, heading in the same direction. He’s been hitchhiking for three hours with no ride. He introduces me to Alan from Santiago. He’s about 25 and a medical student on summer break. He speaks good english and we have a great conversation while sitting on the sidewalk waiting for a bus, which eventually shows up and this time I’m on board and enjoy a three hour ride south to Cochrane. It’s late afternoon when I arrive and a cold Patagonian wind is blowing out of the west. Andy and Alan go their separate ways and I stand against a wall deciding whether to camp or find a hostal. Chochrane seems like a ghost town, or maybe it’s just me, or maybe it’s the window covers on steel hinges next to me, squeeking open and closed in the cold wind, sounding like a saxophone playing a short and melancholy tune over and over…

It’s Saturday evening and I learn that there are no busses leaving town on Sunday. I’m at the southern end of my journey and plan to go north about twenty miles to Patagonia National Park and camp for a few days. I find a hostal, get a good nights sleep, pack my pack and walk to the edge of town on a quiet, cold but sunny Sunday morning, escorted by the ever present and curious dogs and a chorus of crowing roosters. The fickle thumb of fate is in my favor and a van with a couple from France pulls over immediately and in a half hour I’m standing in the sunshine on the edge of the Carretera Austral at the entrance to Patagonia National Park, not a soul in sight, surrounded by endless beauty. 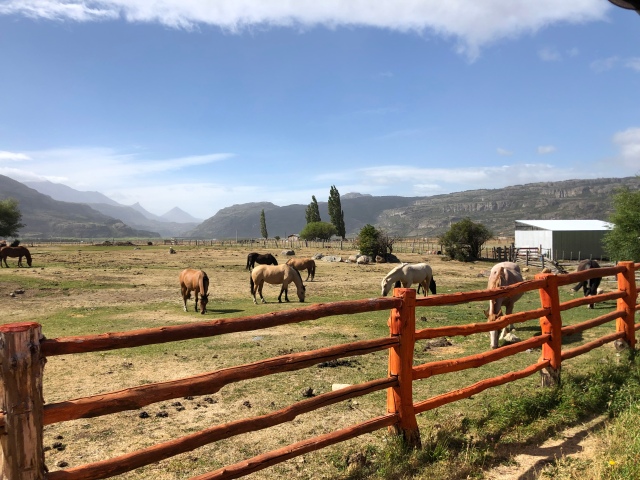 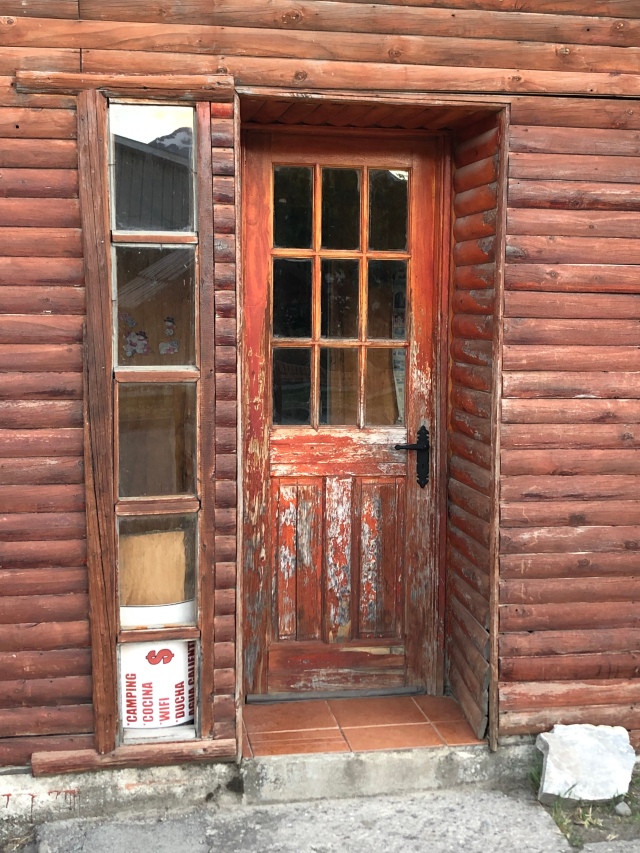 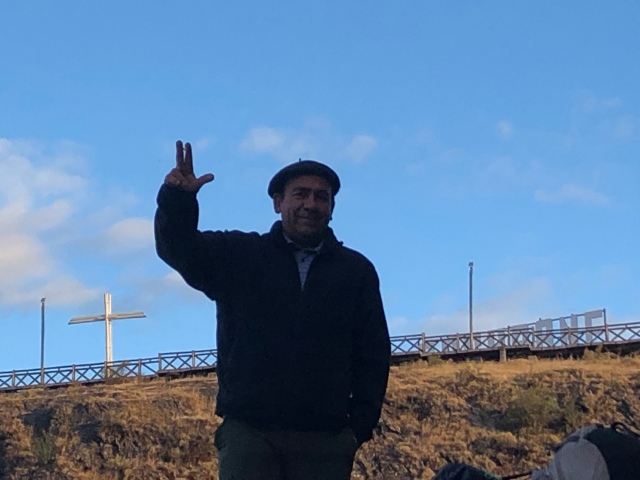 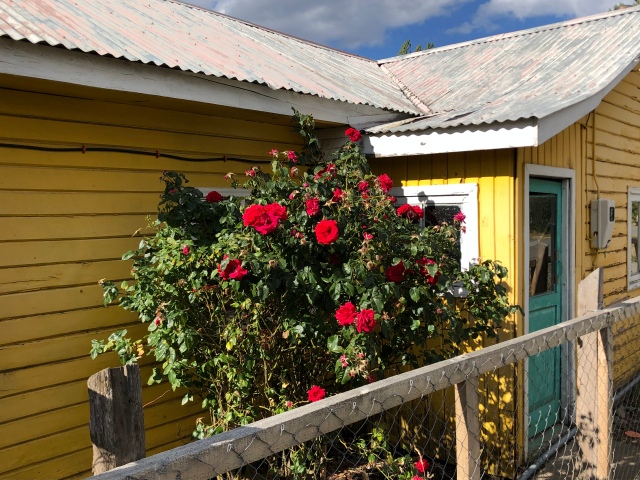